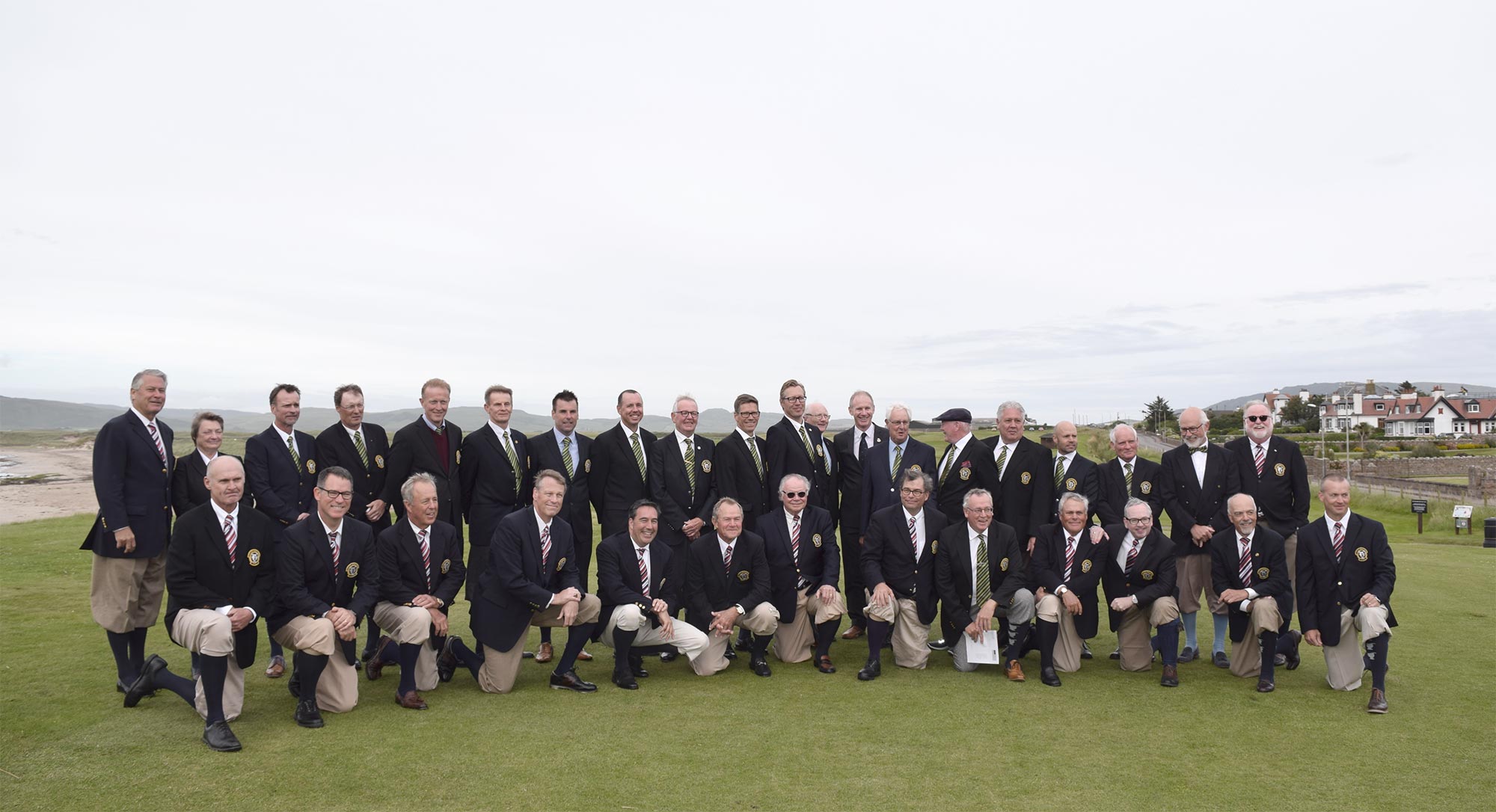 Ralph Livingston III, hickory pioneer and Tom Stewart expert, was due to bring a crowd of hickory-playing friends over from the States for a golfing trip in Scotland, and was keen to have a match against an East Lothian team. In this connection, he contacted David Hamilton, famous for so many things but particularly so for his ‘Good Golf Guide to Scotland’, who had previously guided Ralph and Randy Jensen round Scotland a year or two earlier.

David thought the best place for such a match in that part of Scotland would be Kilspindie and raised a side composed of British Golf Collector Society members, with Pehr Thermaenius from Sweden being the sole non-British participant, thereby creating a ‘European’ team from the outset. Likewise, many of the American touring party were already, or would quickly become, BGCS members. This would comply with the decision that the match would be an all BGCS event between European and US members of the Society.

Whilst Ralph captained that first US side, he asked John Crow Miller to become US Team Secretary, to handle the details of the competition. Together with Winfield Padgett, they formed the original three man executive committee, which continues as the administrative agent for the US team. Its function is to manage the team’s selection, coordinate with the European team Captain and coordinate the conduct of The Hickory Grail when it is played on US soil. John Crow Miller continues as Secretary together with the current team Captain (Mark Wehring) and the immeidate past Captain (Bill Farmer). David Hamilton captained the European team.

The first match took place at Kilspindie GC on 25th May 2000 – one of the great courses to play hickory golf – immediately prior to that year’s Scottish Hickory Championship. The format was to be morning foursomes followed by afternoon singles. The trophy to be played for was a fine old silver water pitcher that had been presented to John Crow Miller’s grandmother, Eula Lee Miller, upon her marriage in 1926. This trophy was called The Hickory Grail ‘to evoke the spirit of what was hoped would be a never-ending quest by hickory golfers competing in fields of honour and international friendship’. Soon after the trophy was named, Ralph Livingston III began to refer to the match as The Grail and the name stuck.

The culmination of this first match in 2000 lead to high drama when Ralph Livingston holed his last putt of 6 foot, with his long nosed Tom Morris putter, in the last match, on the last green, to win the whole match for the USA by just a single point – 6 ½ points to 5 ½ points.  With both teams on the terrace, which is hard up against the 18th green at Kilspindie, there could not have been a more fitting finale to this first encounter between the two sides. As Ralph had been the prime mover in raising the US side, holing that putt was of some significance and, perhaps, even some of the European team were happy for him to achieve this vital point.

After this very successful first match, it is not surprising that there was a call to meet again for a return match the following year, at the same time and on the same course, Kilspindie. This, therefore, was held on 24th May 2001 with David Hamilton captaining the European side and Ralph Livingston the US side who won again by 10 ½ points to 7 ½ points.

With the fixture having quickly established itself in the BGCS calendar, it was felt it should become a biennial event and that it should be played on a home and away basis, just like other well known team events such as the Ryder and Walker Cups.

So 100 years after the first golf team left these shores for the US in 1903, the first ever touring BGCS team travelled to the historically important St Andrew’s GC at Hastings on Hudson, New York State on September 15th 2003. This was thanks to Brian Siplo, Captain of the U.S.A. team and the St. Andrew’s historian. Just like that team of Oxford and Cambridge golfers of 100 years ago, the European side gained a famous victory, winning by 10 points to 8 points, thanks to John Mullock, winning the last match on the last green with the last putt. For this 2003 match, David Kirkwood had taken over the Captaincy and Management of the European side and was responsible for organising a most enjoyable and successful  week-long tour centred around the match itself, with visits to Shawnee–on-Delaware, Sleepy Hollow, Baltusrol and the USGA at Far Hills, New Jersey. Meanwhile, a new precedent was being set by Gillian Kirkwood playing in the match, thereby becoming the first Lady Grailer. David, retained the position of Captain/Manager until becoming Captain of the BGCS in 2012.

This was followed by a return visit to Kilspindie on 26th May 2005, with Original Grailer Chuck McMullin captaining the US side. Thanks to European team member Bob Strachan winning the vital last match to level the scores at 9 points each, the match was halved, thereby allowing the European team to retain the trophy.

On 29th October 2007, the second away fixture for the European side was held at the Tillinghast designed Brook Hollow Golf Club in Dallas, home to three of the leading lights of the US Grail team, Bill Farmer, John Crow Miller and Winfield Padgett, who captained the US team that year. They won by 13 points to 5 points, with the trophy returning to US soil for the first time since 2003.

On 30th – 31st July 2009, the event moved away from Scotland and, in recognition of the growing influence being played by Swedish hickory players within the European side, was played in Sweden over the traditional links course at Falsterbo. Also, for the first time the match was to be played over two days with foursomes and fourballs being played on the first day and singles on the second day, giving further proof of the growing popularity of the event. Original Grailer and George Nicoll expert Roger Hill led the US side. Europe recorded its second victory, winning by 14 ½ points to 9 ½ points.

In 2011, the match was played on November 8th – 9th at The Dormie Club, a new Crenshaw-Coore designed course at Pinehurst, North Carolina, courtesy of long-time golf collector Bobby Hansen. The US side, captained by Bill Farmer, regained The Grail by winning the match 14 points to 10 points, thus giving them a 4 ½  - 2 ½ lead in the series.

For the 2013 match the Grail visited England for the first time, the venue being historic Walton Heath GC October 8th – 9th 2013. Walton Heath had famously hosted the Ryder Cup in 1981, with Europe sincerely hoping that the all dominant US team boasting Nicklaus, Watson, Trevino, et al would not be a pre-cursor to the hickory version. Nigel Notley took over as Captain for Europe and Bill Farmer continued as US captain for a second time. As it transpired, David Kirkwood, who had so influenced the previous decade of matches holed a plucky 10 footer on the 17th green to snatch a win and halve the overall match 12 all.

In 2015 for the match in the US, we moved to New Jersey in late October and played on the illustrious Baltusrol Upper Course. This is considered the more strategic of the two courses, which between them have hosted 17 major championships. Although slightly shorter than the lower, it greens are fiendishly quick. Both courses were designed by A.W. Tillinghast. The match was played under crystal blue skies with the trees at their very best prior to the fall. The Americans were mightily impressive on the first day taking 10 ½ points out of 12.  Although Europe clawed back the singles by 6 ½ to 5 ½, the die was cast and the overall score 16 – 8.

In 2017 we returned home to Scotland, but at the western extreme. There are certain locations in the world of golf that are iconic. Machrihanish is at the forefront. So remote, beautiful, inaccessible! It always was and always will be but for all the trials and tribulation of the journey, the course and the welcome is so worth the effort.

Tuesday morning dawned, dark wet and foreboding and worse still the wind was blowing at 25 MPH from the wrong direction for the carefully sited tees. The players got soaked, mainly in the waste high rough which was prevalent at every hole. Machrihanish has glorious driving holes over sand hills to hidden fairways. Greens are extravagant in their contours and perched on the top of sliced off sand hills. This was tough. Henrik Peyron was the star for Europe and at the end of the foursomes and fourballs, Europe led 8 ½ to 3 ½

On Wednesday with the weather quieter, we could all enjoy the glorious scenery. The first day deficit was much to much for the visitors and the 12 singles were won by Europe 9 – 3 and the overall match result 17 ½ to  6 ½.

In the aggregate, the scores over these 10 encounters stand at 105 points to the U.S.A. and 99  points to Europe, meaning that the difference between the two sides over those ten years is less than one point per match.

Long may this fixture endure and long may the Spirit of the Grail flourish.

Finally, I acknowledge with grateful thanks the help given to me by so many in preparing this short history of The Hickory Grail.