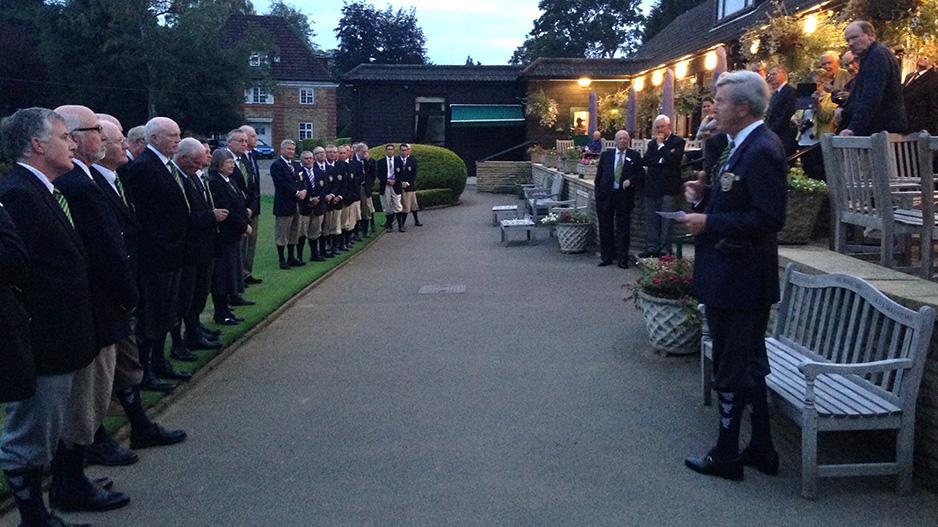 The teams lined up on the edge of the putting green as the flags of both teams were raised accompanied by the anthems although the US tune was apparently different to what had been expected, but no offence was taken.

Great concerns had been raised over the speed of play needed to get everyone in for the Opening Ceremony but those were ill founded and as everyone was assembled in their Blazers and Plus Fours to be piped in by a Scottish Piper after Walton Heath Club Captain Michael Vaines had very kindly opened the formal arrangements by welcoming us to the Club. It was truly magnificent that a club of Walton’s stature felt honoured to host the Grail. They were (arguably) of course, the last Club to be awarded the Ryder Cup in Europe before the current practice of asking the host Club to create a significant commercial package.

After a welcome drink provided by the Club, the Teams, supporters and members dined on an exquisite Steak Pie with a suet crust. It was very well received by all and a sign of the quality of hospitality that the Club is renowned for.

Ken Macpherson and Philip gave us a conducted tour of the Fowler room with Ken regaling the stories around the Ryder Cup of 1981 and how players from both teams had acquired hand made persimmon woods from club professional, Harry Busson.

Tuesday morning dawned bright and warm, and the Autumn colours of the Old Course were a great sight for the opening foursomes.

In the opening foursome, Society President Philip Truett, was paired with arguably the best player in the European team, Jorgen Isberg and Jorgen’s power coupled with Philip’s course management and extraordinary putting brought the first point for the home side over American Captain, William Farmer and Secretary, John Crow Miller.

The foursomes continued to go well for Europe as Ian Hislop and Erik Brandstrom, Jonas Fack and John Mullock, debutants Claes Arma and Chris Walker and then Clive Mitchel and Robin Shuker each won before Chris Deinlein and Mark Wehring wrestled a point back for the US. Europe lunched well at 5 points to 1

In the afternoon fourballs, European Team captain Nigel Notley replaced David Kirkwood after a morning of physio on a bad back, and partnering the legendary Claes Kvist, grandfather of Swedish Hickory golf, extended the lead. With local man Jonny Firth, also on debut, pairing up with the experienced John Still, the lead was “improbably” extended to 7 to 1.

And then the tide turned dramatically. Scott McAllister playing his first Grail teamed up with gritty New Yorker Mike Beckerich to win 4/3 quickly followed by Texans, Farmer and Wehring, and match 6 with Matt Dodds and Rick Wolfe winning in the country, all was set for a dramatic finale to the game between Isberg & Hislop against Deinlein and Sampson. The home team, one up with three to play, was hauled back to one down playing the wonderful short hole across the valley. Normally the 17th, this was now the 18th due to the Club bringing in a utility hole whilst the 18th green is reconstructed.

Only Hislop playing a faded baffey managed to hit the green, but, as cool as you can, Chris Deinlein whose tee shot had rolled back down the hill in front of the green, chipped up blind to around 6 feet from where he holed to gain the all important putt to bring the USA within just 2, at 7 games to 5. The visitors took great heart from this comeback and would start stronger in the morning.

But not before yet another extraordinary night as both teams and their husbands, wives, partners were most graciously entertained by Juliet and Philip Truett at Walton Cottage, which for those of you who do not know is almost in touching distance of the Clubhouse. This time the champagne reception was accompanied by a tour of Philip’s unique book collection the like of which is without comparison anywhere. Our thanks are extended yet again to the Truett’s!

Wednesday midday was dry as we moved onto the New Course and the 12 singles matches got underway, but the weather would turn more chilly as would the score board for Europe.

European Captain Notley, elected to follow his pre-tournament decision to play each player from the squad in two matches out of three with the exception of Jorgen Isberg and Jonas Fack whom would play all three.

There was an important win for Chris Walker in the top match against Curt Sampson. Comfortably on the 17th but with a 40 foot putt across a green with a pronounced slope, Chris was shocked as Curt holed from a bunker for an unlikely par and just managed to get down in two to secure the match. William Farmer's Captains performance in match 2 against Jonas Fack, brought the US back within two matches again but Jonny Firth in the third match against David Brown seemed to settle the ship.

Carolyn Kirk, an unbelievably plucky (well not unbelievable really because the English Senior International is from Ganton, Yorkshire) having seemed in deep trouble at 5 down to Breck Speed, but then won 7 holes to go two up with three to play. The fairy story did not quite materialise as Breck fought back to win the last three holes to take the match. The New course has a long finish and Carolyn was both playing off the Grail tees and giving a shot! Her efforts were commendable but Breck is a fine player. Is it all that water he drinks!

Tanner lost to Beckerich and Still to Hill, but Shuker won at the 15th and with the dependable Jorgen Isberg seeing off Chris Deinlein, Europe was one ahead with three games still on the Heath.

Perhaps believing the “beware the injured golfer” syndrome would work its magic again, Notley sought also to turn over his defeat by Wehring at Falsterbo. But going 2 down at the 9th Wehring played par golf in to win the match in the country, a fate that also befell Toni Kammerer in the anchor match.

It should be recorded that Mark Wehring is, at the time of writing, the most successful Grail golfer. In his 6th Grail he is yet to taste defeat!

And thus with the score now showing the US leading by 12 matches to 11, David Kirkwood chipped in to win the 16th to go two up.

Late on the afternoon of Wednesday the 9th October, very appropriately the Captain of the British Golf Collectors Society, David Kirkwood, holed an 8ft putt across the break on the 17th Green of Walton Heaths New Course, to close out his match with Scott McAllister and draw Europe level at 12 all. A large crowd of players and supporters of both teams together with Walton Heath members applauded a competition played in the very best spirit between two evenly matched sides. After such a compelling contest it was felt by all that this was a marvelous result for Hickory golf and the upholders of its history and traditions. 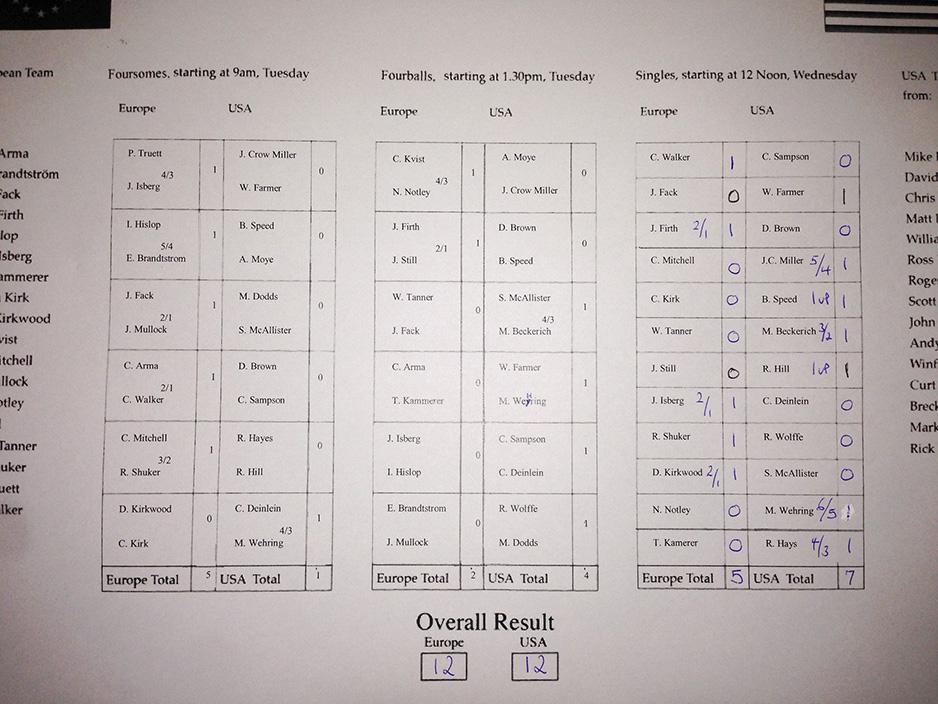 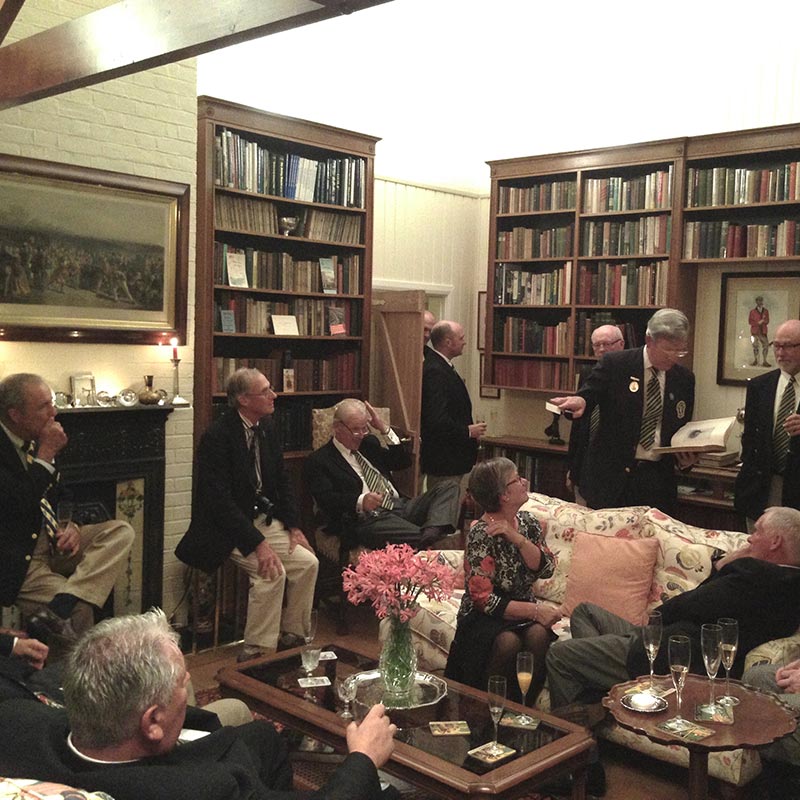