Europe beat the USA by 10 to 8 matches to win the Hickory Grail for the first time... and on foreign soil too!

Things were not looking good for the visitors after losing four of the six morning foursomes, but some adept team placements in the afternoon, which secured five out of the first five singles, gave us a chance. Excitement mounted for the spectators with some very tight games in the later stages. Man of the match was auctioneer John Mullock, who kept his nerve playing the last hole against Randy Jensen to win, and the Hickory Grail trophy was ours!

Many thanks to our American hosts, especially Brian Siplo, Rick Wolffe, John Crow Miller and Larry Stewart (Sleepy Hollow) for all their hard work in planning and organising the match and ancillary events. The twenty six BGCS members who made the trip thoroughly enjoyed themselves. 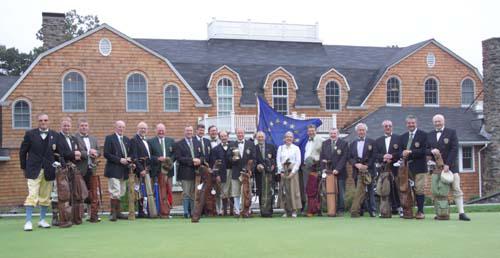