The Eleventh playing of the Hickory Grail took place in Dallas in the last week of October 2019.

A touring party from Europe comprising 8 Swedes, 7 from England and a Scotsman arrived to take on 16 Americans, the rump of which were from Texas. The tour started however with a memorably trip to the Texas Fair where we crowded in with 170,000 other folk to eat Corney Dogs and Turkey legs. As our hosts explained in jest, this was to be an experience that will confirm our worst prejudices about our colonial cousins and was at the polar opposite to the rest of the tour. It was noted that no Dallas residents attended with us! It was a lot of fun

We had played in Dallas before at Brook Hollow in 2007, but this time we were at the new Coore & Crenshaw designed Trinity Forest. The club had taken a rather poor piece of landfill which the City wanted to restore to a natural habitat within the urban forest south of the City. The result was spectacular.

Although the course was surrounded by trees, there were none on the course itself. This was a links style set up where approach putts could be played from well off the playing surfaces. There were no artificial rough cordons around the greens or bunkers. Just a moon scape with eccentric contours, run off slopes and wickedly difficult pin placements.

Sunday is the traditional day for the Flag raising ceremony. Prior to that we had the opportunity to play the 9 hole par 3 course, which as you would expect was excellent. It is adjacent to terrific practice facilities complete with Titleist Pro VI balls (for those who like that sort of thing). This is the home of the Yayne Stewart Kearning Center and part of the Southern Methodist University golf team facility.

Our host John Crow Miller, founder of the Grail with Ralph Livingstone and David Hamilton, then introduced us the First Tee. This is a group of kids who may not ordinarily have had access to a facility like Trinity Forest, or to a group of players in ties and plus fours playing with hickory clubs. We provided them with a range of clubs and watched the delight on their faces as they wielded them with no little skill. Plenty of hands in the actions and a welcome absence of the dip and drive  now so commonly taught. There is hope for the future!

The two teams were piped out across the putting green to the theme from Dallas. Some of us are old enough to remember J.R.

The flags of the BGCS, Stars and Stripes and Euro were hauled up the flag pole against the backdrop of a string quartet playing the anthems. On the clubhouse itself, the flags of all competing countries and states were on display.

John Crow Miller acted as master of ceremonies introducing Tony Norcott, Captain of the BGCS who made the welcoming speech. We had addresses from Eli, one of the First Tee players standing on for Eric Johnson, the Mayor of Dallas, together with a welcome from the Trinity Forest director of golf, Richie Hare and the director of the First Tee of Dallas, David Rambie. The teams were then introduced by Captains Notley and Wehring.

Drinks and canapes were taken on the large veranda overlooking the course as the sun set.

Monday is the traditional practice day, delayed for two hours by course damage from the previous nights tornados. Captain & Mrs Michelle Notley had just flown in from the Typhoon in Tokyo and clearly are to be avoided on foreign trips.

In the evening we enjoyed a Mexican buffet at the home of Julie and John Crow Miller hosted by the United States hickory grail team. It was a splendid abode and marvellous occasion. Both teams would like to thank them both for their considerable generosity.

Tuesday is a busy day but fortunately with both the 1st and 10th tees adjacent to each other, we used a two tee start which enabled the morning foursomes to finish in very good time and afford us a decent gap for luncheon before the 6 afternoon fourballs.

Both the foursomes were shared three a piece with big wins for Stefan Kjell with Jorgen Isberg, Henrik Peyron with Mikael Martinsson and notably Jonas Fack with Jenny Hunt. These are scratch matches and the ladies play off the same tees as the men.

Similarly, the four balls also finished three a piece. There were big wins for the US in the first two matches care of Curt Sampson and Dave Brown and then Jeremy Moe and Scott McAllister

For Europe Jenny and Tony Hunt secured another point in the anchor match.

Although there was no formal function, most payers headed for Bob’s steak house, which is notable for the smallest filet being 16 ozs and an oversized carrot.

Wednesday’s singles were therefore beautifully poised. Europe started the faster and ran into a 10 ½ to 7 ½ lead after the first six games with a notable half for Chris Walker against John Crow Miller, having been 5 down. Willie Tanner scored the winning point for Europe with the US strong men, Wehring and Sampson out in the final two matches, so unluckily for them their points were to no avail.

Curt Sampson had played brilliant sub-par golf over the two days. It was great to see him playing so well. His three points was an immaculate return. Also with a 100% record was Chris Deinlein. For Europe, both Jenny and Tony Hunt scored two out of two with Henrik Peyron getting 2 ½ from three.

We left Trinity Forest for the final time and cannot thank the members of the club too much for their very generous loan of their superb course.

The concluding event is the Convivial Dinner. We returned to Brook Hollow GC and their Oak Room for a splendid dinner at which Europe were awarded the trophy for the first time in the US since 2003. Formal but entertaining speeches were made by BGCS Captain Tony Norcott, the two team Captains and Curt Sampson, who very generously supplied each player with a copy of his 18th book, Roaring Back, the story of Tiger Wood’s remarkable comeback at Augusta.

John Crow Miller spoke movingly of the history of this event and awarded the Livingston Medal for the person who has done most to foster the spirit of hickory golf to original “Grailer” Winfield Padgett who was able to attend both the convivial dinner and the flag raising. Win made a charming response and received a standing ovation from the assembled company, richly deserved.

And so concluded the 11th Grail. We look forward to old and new rivalries at the home of golf in October 2021 with keen anticipation.

In Celebration of the Events at Dallas

We all kicked off The Grail
upon a culinary trail
at the foot of a 'Big Tex'
with red ribbons on our chests.
The corn dogs, beers, & brats
soon had us snoring in our cots.

It surely would be callus
for us not to mention Dallas
All were glad to roam the avenues
trod by Romo, Speith and "W."
Some even spent a day
retracing steps of J.F.K.!

We're not sure if it's true
but we'll share it here anew
that perhaps in dated reference
some within our very audience
(and you know who you are)
kept an eye out for "J.R."

A tornado did its best
to threaten our fine fest
but though it 'dampt' the course
the grounds-crew proved a force
and made ready for the day
the practice rounds to play.

It was quite a site to see
with the clubhouse looking 'twee'
draped with flags from many nations
awaiting later celebrations.

The first day was a splitter
leaving players all a-twitter
at the insight and the daring
of the Captains and their pairings.

At the Millers house we fested
with much food and wine ingested
of a Mexican persuasion
that was fitting the occasion.

The second round proved fateful
with audiences much grateful.
to view o'er hill and valley
the competitors a-rally
with sunlit weapons flashing
and their mashies all a-clashing.

Two Swedish wives soon rallied
and in dresses forth they sallied...
out in carts to see their caddies
and to cheer their stalwart laddies.
Some say it tipped the scales
in the battle of the vales.

Although the Yanks were bested
to a man they all protested
that the E.U. skill with hickory
was well worthy of the victory.
Post camaraderie and fun
All raised a toast to say "well done!" 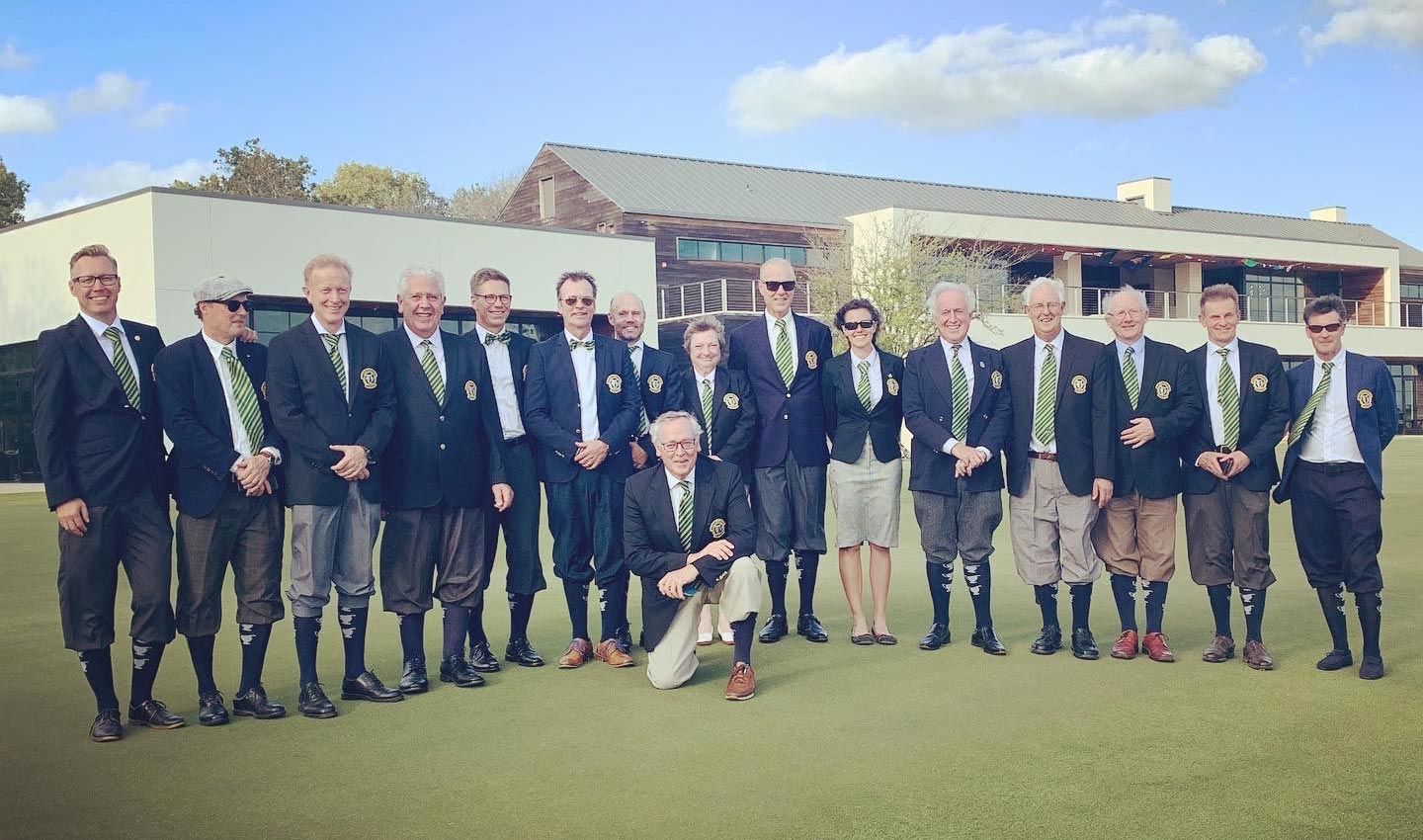 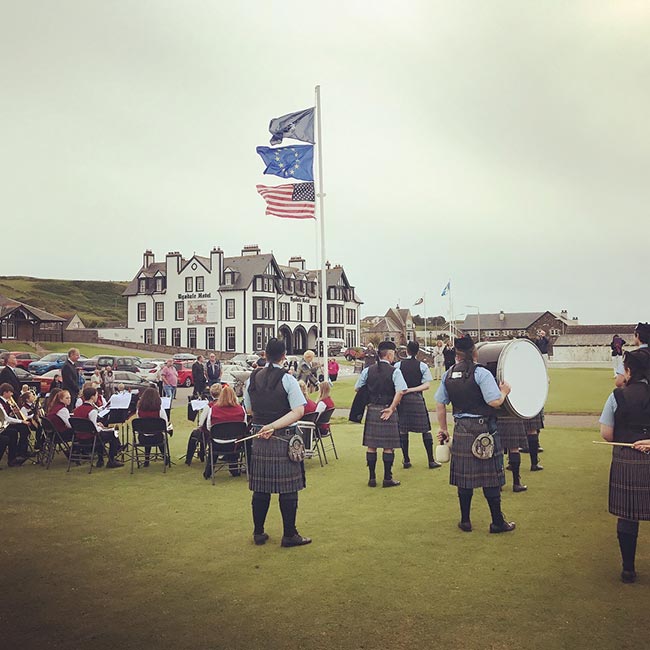